Forget the Sunday night phone call. Grandparents and grandkids are connecting— and connected—as never before.

On a recent Sunday evening, each of my kids was engaged with some electronic gadget or another. I was about to call for a moratorium on screen time and a return to family time.

Read the complete Next: Planning & Living the New Retirement report .

Unbeknown to me, they were already enjoying family time.

My 9-year-old in our Philadelphia home was playing an online Scrabble game with his grandmother on her iPad two time zones away in Denver.

My 11-year-old was video-chatting with his grandfather in Florida on Skype, a program I didn't even know we had.

And my 14-year-old was checking in with his "friends" on Facebook. And whom does he count among his 300-plus friends? His great-grandmother in Minneapolis.

Certainly, it's nothing new that kids are plugging in and staying connected. But what is new is that it may be a grandparent on the other end of that virtual tin can—and that technology is bridging the vast age and distance gap that has long divided the generations. "A group of us was having dinner, and one woman had to tell her husband to put his iPod Touch away. He was emailing his grandchildren," says Mary Henderer, a Wilmington, Del., grandmother of four.

It's a perfect storm of demographics and technology.

As a group, grandparents and grandchildren have plenty in common. They have free time, disposable income for gadgets and gizmos, and a keen interest in staying in touch with people.

As for technology, smartphones, tablet computers and digital cameras have made sharing fun instead of frustrating. And the affordability and speed of broadband Internet have made possible activities like video-chatting and streaming home movies.

The new era is in stark contrast to what took place in recent decades.

"When the baby boomers went to college and moved away, we lost an entire generation of connection between grandparents and grandchildren. They saw each other once or twice a year, and there was a real disconnect," says Andrew Carle, professor and director of the Program in Senior Housing Administration at George Mason University in Fairfax, Va.

"Now with technology, we are regenerating those bonds. People say technology is so impersonal, but we are watching it being used to reconnect one of the most personal and important relationships of the species."

Prof. Carle adds, "I watch my own kids talking to their grandparents 1,000 miles away, and I love it," he says. "They may take it for granted, but I only saw my grandfather once a year. Nothing will replace a hug, but this is as close as it gets."

Granted, on the surface, many of the messages that fly back and forth are as trivial as the messages that kids send to one another. But trivial communication are often the building blocks of many close relationships. 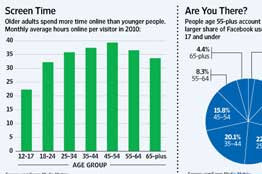 Chart data showing how technology is used across generations.

Eleven-year-old Emily Hykes of Orange County, Calif., likes to make singing and dancing videos for her grandmother, whom she calls Honey, to watch in St. Paul, Minn. But her favorite way of communicating with her grandmother is using her iPod Touch to text or email.

"Honey, I hear it's below zero there. I'm sitting on the beach. Love, Emily."

"Emily, I'm sitting on the beach in Florida. Back at ya. Honey," her grandmother, Carolyn McKasy, texts back.

Emily's mother, Kristi Hykes, who is caught between the two generations of texters, says her mother and daughter's electronic correspondence largely consists of jokes about the weather and photos of their favorite sushi meals. "It might just be a few sentences back and forth, but at least a couple of times a week they are in touch with each other," says Ms. Hykes. "My kids are much closer to my parents because of technology."

The family even used their computer's built-in camera, the Internet and Skype software this past December to celebrate a virtual Christmas with the extended family in Minnesota. The grandparents wanted to give their seven grandchildren a Christmas gift at the same time—a water trampoline at their lake cabin. 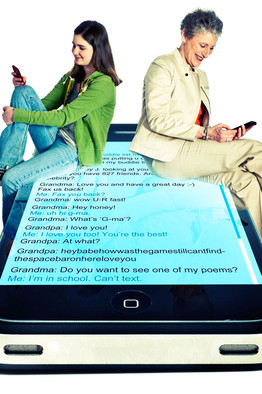 A generation ago, grandparents and grandchildren living apart had Thanksgiving, birthday cards and a Sunday night phone call—after 8 p.m., when long-distance rates went down.

"There used to be a scarcity of communication, and it was very precious," says Thomas Kamber, founder of O.A.T.S., or Older Adults Technology Services, a nonprofit training and support center in Brooklyn, N.Y. "Nowadays, communication is so ubiquitous it's free. Older people are catching on to that, and they want to be a part of it."

Mary Madden, senior research specialist with the Pew Research Center, says: "The most powerful force convincing them to take the plunge…is their families. Especially when it comes to their grandchildren, they do not want to be left out of the loop."

Tabb Farinholt, 73, who lives in Gloucester, Va., joined Facebook about two years ago when a friend from her book club told her about it. "She said, 'You need to do this because you'll learn so much about your grandchildren.' "

Those were the magic words. She has been enjoying looking at pictures and posts of her six grandchildren ever since. Sure, most of it is inane, and she's even considered stopping. But then she thinks of the photos she might miss seeing.

"It does make you feel closer to them—just to see their picture or a few words by them," she says. "They are certainly not thinking, 'How can I be close to my grandparents?' And I wouldn't expect them to. But Facebook is kind of nice to keep up with them a little bit."

Over the past few years, Facebook has morphed from a closed site for college students to an online playground where barriers of age, distance, background and technological expertise have been leveled. It has become a rare space where generations can meet on neutral turf to share and interact. Currently, users must be 13 years old to open a Facebook account, resulting in the young and old tiptoeing into the space at the same time.

Says the Pew center's Ms. Madden: "Seniors who have recently retired, teens and young adults just beginning their lives are all going through very significant changes. And this social networking and communicating can be a very powerful force in helping them move forward."

She also says that grandparents can play a unique role on Facebook. Plenty of kids block or limit the access their parents have, but they give free rein to the extended family—enabling grandparents to perform duties of light surveillance.

Recently, the 20-year-old sophomore at Denison University posted a Halloween photo of himself gesturing inappropriately (in character) on his Facebook page. Not long after, he received an email from his grandmother: "Obscene gestures on Facebook. Just so sophomoric." And she had underlined every word.

"If my mom told me to change it, I might have argued with her," he says. "But it was different because it was my grandmother. So I changed it. It's actually nice to have her checking on me and giving me advice."

Such frequent and casual communication is actually changing the relationship between these two generations—and so far, all for the better.

With his grandmother as easy to reach as a roommate or teammate, Mr. Farinholt was compelled to ask her to help with a study-abroad application. Yes, even after the Halloween incident.

"He emailed me his essay to read. And of course, it was due the next day," Tabb Farinholt says. "But I didn't say anything because I was so thrilled to be asked. I was a high-school English teacher, but this was the first time any of my grandchildren asked me to edit anything they've written."

Dick Anderson, 77, of Bradenton, Fla., fields requests for help, as well. He emails and Skypes regularly with his four grandchildren in Virginia and Minnesota. Recently, he's been engaged in an online discussion on Facebook with his oldest grandchild about investing.

"He was curious and wanted to learn more. He had lots of financial questions for me," says Mr. Anderson. "Sometimes it's on Facebook. Sometimes it's texting. Either way, I'm here for him."

Toys for All Ages

Certainly the teaching goes both ways—especially when it comes to technology. The vast improvements in personal computers and phones over the past few years make the new toys the perfect middle ground for the generations to share their curiosity and expertise.

For the Feiner girls of Ridgewood, N.J., teaching their grandfather, Harold Schwartz, 79, of Cape Breton Island, Nova Scotia, is a family affair.

"We teach him how to do things on his new computer," says 9-year-old Amelia Feiner. "And he gives us a dollar and takes us to the candy store to buy caramels."

For the past few years, the girls' grandparents have taken an annual cruise lasting several months. They see plenty of ports, but they don't see their granddaughters. So during those months it's back to emails. Lots of them.

Last year, when 11-year-old Ella Feiner was in fourth grade, she and her classmates joined her grandparents for a virtual cruise around the world. They posted a laminated map of the world on the wall and marked every stop the cruise ship made.

"Every other day my grandparents would send two emails, one for me and one for my class. They like to tell us about their ports or send quizzes and geography games," says Ella. "If I forgot, my classmates would say, 'Did we get a message?' "

"My girls have a whole separate relationship with my parents that just skips right over me," says Ella's mom, Shoshana Feiner. Which is perhaps a key component to the success of such interactions. Email, text and Facebook are done on kid time or grandparent time, and they require no intervention or supervision from the parents in between.

In her day, Ms. Feiner grew up down the street from her grandmother and saw her several times a week. "But if my grandmother was over, that meant she was baby-sitting. She was in charge," Ms. Feiner says. "Their style of communicating today is much more fun. Communicating from afar is about being friends. There's no discipline involved."

No discipline, and sometimes just a single word.

When Mary Henderer in Delaware broke her wrist snow-blowing this winter, she sent an email updating her family on her swift healing after a doctor's visit. Her two grown sons responded with good wishes and lots of questions. Her 15-year-old grandson replied, "Yay!!"

Says Ms. Henderer: "That was the one that mattered to me."

Visit the platform to find more EssayPedia.com reviews. Know the benefits of this service and the reasons why you should order papers from their experts.

All rewards of the event are character bound. If players want to know more about such tips, players can go to IGGM.com. Plus, they’re giving away 6% of Lost Ark Gold to every player who goes to buy Lost Ark Gold. This is a very rare event that every player should not miss.