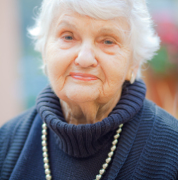 Florence Horne spoke those words at a meeting of the board of directors on February 3, 2011, and died of a heart attack sometime after midnight the following morning.  She had become the face of Age Looks at Aging because she came to represent everything this project is about.  She was one of the original participants in it, and quickly assumed, if sometimes reluctantly, a leadership role.  When the board of directors was formed, she was on it, and the rest of us quickly got that she was the elder of the tribe - because, in the deepest sense of that distinction, that’s who she was.

While I personally still experience a profound sense of loss, I've chosen to see the impact Age Looks at Aging, and all of us who have been involved in it, had on the last couple years of her life.  When I first met Florence she was frail, frightened, fragile and confused.  She used a cane to support herself, and was afraid to leave the confines of The Gardens of Santa Monica.  Crossing Ocean Blvd. was too dangerous for her, and, I believe, her whole world had become uncertain and dangerous.  She has shared that the camera got her back into the world.  The cane, which was an artistic device she employed in many of her early photos, was set aside as an implement to support herself.  She ventured out of the doors and crossed Ocean Blvd.  She got back into college.  Beyond that, she became the face of ALAA, an articulate spokesperson for who we are, and the proof that our elders need to speak, and we need to listen.

After her last board meeting concluded, I talked to her alone, and she told me that she was very concerned about the bewilderment and fear people experience when they come to assisted living communities.  She wanted to offer support to them - something she always did at The Gardens for newcomers.  I told her that she might consider blogging on that subject on our website because it would generate a conversation in the world that was important for everyone to participate in.  I also told her that I thought this was a really important thing for ALAA to take on, and asked her if she would sketch out some notes on how she saw the program being implemented.  She agreed, and the board of directors is now committed to implementing this program as a legacy to Florence.

From the time I began the pilot project of ALAA, Florence continually expressed concern for "those who don't have a voice" - the people who experience real challenges in their lives that have them be incapable of expressing themselves fully.  That has always been the Florence I have known - concerned about others - wanting to make a difference for people.

Because of ALAA, Florence got to be fully expressed and powerful.  She saw herself much differently than when I first met her, and was seen and heard as an almost new person by her family, which meant so much to her.  She also understood how important she was to us, and thrived on being with us and being such an important part of what we are doing in the world.

And what would we have been without her?  She was our guide, our conscience, and our beacon.  She articulated what we are about better than any of us could.

We have lost Florence, the person, but we haven't lost what she taught us, and who she made us.  There will always be a seat on the Board for her.  She has departed from our physical presence, but her wit, intelligence, conscience and wisdom are still with us, asking the right questions, and guiding us with her gentle, powerful spirit.

Brian, you did a beautiful job of capturing Florence in this poignant tribute.

have met and admired the beloved person that Florence will always be,

to me and others.